A. Discuss the questions with your partner

B. Listen to the conversation and complete the question. (Audio 9.5)

The teenagers are answering the following question:
What would you do if you were invisible for five hours?

C. Listen to the conversation again and use the correct names to complete the sentences. 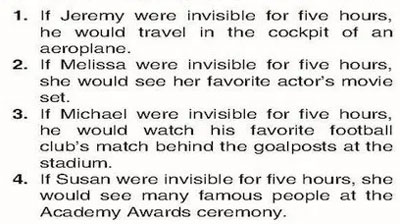 E. Work in groups of 4. Read the teenagers’ answers above and discuss the following question. Whose answer do you think is the most interesting of all? Why?

Melissa's answer in interesting. I wonder why she does not see her fovrite actos as herself.

F. Work in the same group. Use your imagination and think of an interesting answer to the question in activity B.

If I were invisible for five hours, I would sing a song on a square and nobody would see me which is good because I have a terrible voice.

G. Share your group’s answer with your classmates. Listen to all the groups’ answers and vote for the most  interesting answer. Sınıf arkadaşlarınızla görüşlerinizi paylaşınız.

H. Work in groups of 4. Take turns to ask and answer the questions and complete the table.

What would you do if you had a time machine? Why?

I. What would you do if you had the superpowers of your favorite superhero? Give at least three examples. Then present your ideas to the class.

J. Read the situations and give advice. Start with the phrase “If I were you, I would...”.

L. Discuss the following questions with your partner.

M. Make wishes for the following situations. Start with the phrase “I wish …”.

1. You work really hard. You work even at weekends. So you feel extremely tired. I wish I didn't work at weekends.
2. You don’t like living in the city center, but you have to. I wish I lived in the country.
3. Your best friend has moved into another city and you miss him/her a lot. I wish he/she were here.
4. You want to work out regularly, but you’re too busy. I wish I head time the work out regularly.

N. Read the news report and answer the questions below.

1. Who is the news report about? It's about Naim Suleymanoglu.
2. What sport was this person interested in? He was interested in weightlifting.

O. Read the news report again and complete the chart below. 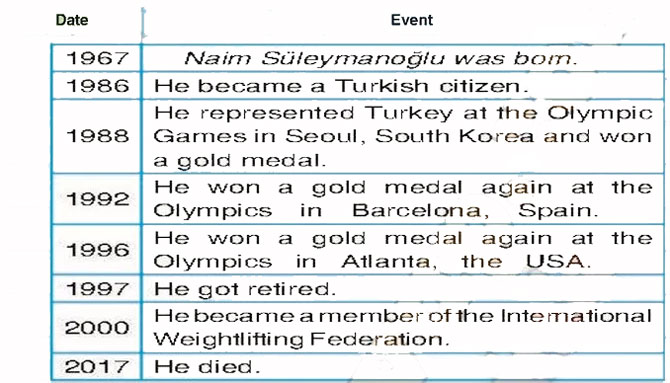 P. Work in pairs. Look at the chart again and take turns to make sentences as in the example.

1967 is the year when Naim Süleymanoğlu was born. 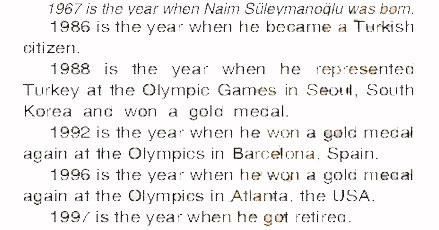 Q. Find the words (1-5) in the text and guess the meaning from the context. Then match them with the definitions (a-e).

R. Use the words above to complete these sentences.

1. Many traffic accidents occurred yesterday due to the terrible weather conditions.
2. Unfortunately, her grandmother couldn’t get over cancer so she passed away.
3. Mandy is very shy. She never participates in the games that other children play.
4. It seems to me that Rachel is much better than her nearest rival. Therefore, I’m sure she’ll be the champion.
5. Arnold competed in many international competitions when he was younger.

S. Read the text again. What does the author wish to do? Choose all the correct answers.

He was a great sportsman who had many achievements in his area.