A. Discuss these questions with your partner.

B . Listen to the presenter and her guest. What festival are they talking about? (Audio 7.6) Choose the correct answer.

C. Listen again and put the steps of the process in the correct order

D . Work in pairs. Look at activity D again. Take turns to describe the process of carving a pumpkin. Use the following words to tell the order of the steps.

E. Read the steps below and complete the sentence.

The following sentences are about how to make a French omelet .

F. Read the steps in activity F again. Write the process of making an omelet. Make sentences as in the example. Use the following sequence words

I. Read the following text. What festivals is it about?

J. Read the text again and complete the table.

K. Read these statements. Then read the text again and tick the correct column for each one.

L. Work with a different partner. Look at activity J again. Talk about the festivals in turn.

M. Read the paragraph and fill in the gaps with the correct words.

Do you know how chocolate is made at home? Here’s the recipe. First, a cup of cocoa butter is (1)grated and put into a small, heat-safe bowl. Second, a cup of coconut oil is added. Third, a glass of water is (2) poured into a shallow pan and heated. Next, the bowl is placed in the pan. You should stir the oil and butter occasionally until smooth. Then a cup of cocoa powder is added and (3) mixed well. After that, some vanilla is (4) sprinkled . Later, half a cup of honey is poured into the mixture. Check if the chocolate is sweet enough for you. You can also add some dried fruit or nuts. Finally, the mixture is poured into a tray and (5) kep in the freezer for half an hour. Your chocolate is. 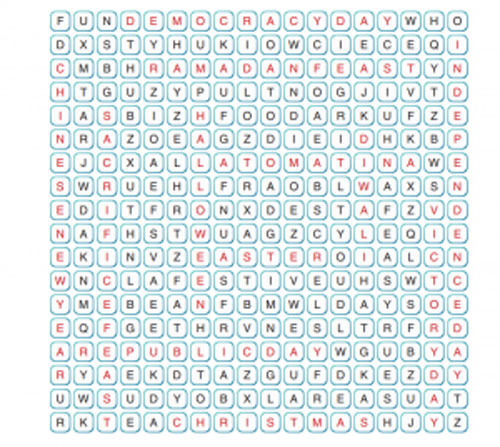 P. Work in groups of 4. Look at the festivals above. Take turns to answer these questions.

Q. Work in groups of 4. What do you think about the following quote? Discuss it with your group members. Then share your group’s opinions with the class.

“The greatness of a culture can be found in its festivals.”

The festivals of a nation reflects their culture.