1. Which of these places are on the World Heritage List? Guess and mark.

2. Answer: What does an archaelogist do?

An archaeologist studies the cultures, archaeological remains and languages in different parts of the world.

3. Listen to the interview and answer: What does “excavate” mean?

a. to remove and uncover something by digging
b. restorate

5. Work in pairs. Read the roles, the information about the pyramids and the sample dialogue. Then, ask and answer questions

6. Answer: What kind of places should we preserve for future generations?

7. Read the text about the world heritage and answer: What is the purpose of the World Heritage Convention?

When the countries sign the World Heritage Convention, they promise to protect their natural and cultural heritage

8. Ask and answer questions about the text.

10. Answer: Which archaelogical site would you like to see in Turkey? Why?
11. Listen to the text or watch the video. Write the names of the World Heritage Sites in the box on the timeline. 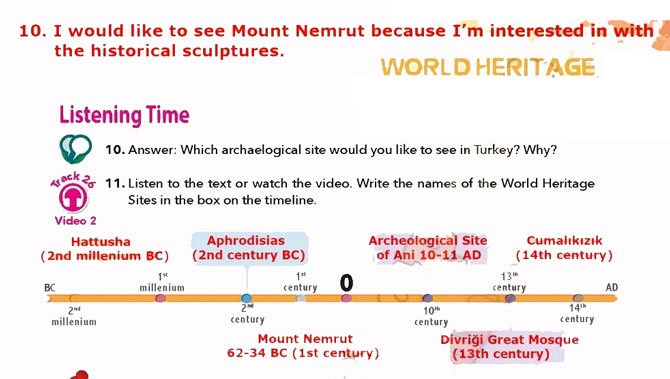 12. Where are the world Heritage Sites in part 11? Find out and tell the names of the cities.

(T) 1. It is possible to see a lot of statues in Aphrodisias.
(F) 2. Cumalıkızık has a unique natural beauty.
(T) 3. Hattusha was an important city around the year 2000 BC.
(T) 4. Divriği Great Mosque has incredible shadow plays on its gate as the sun moves.
(F) 5. You can visit the tomb on top of Mount Nemrut.
(F) 6. Archaeological Site of Ani has only traditional Turkish art.

(1) The Xanthosians were at war against the Persians.
(4) Firstly, they put all women, children, treasure and slaves on the acropolis.
(7) All Xanthosian men jumped off the hill into the water and killed themselves.
(3) Before Persians made their fnal attack, the Xanthosians moved back into the city because they knew they would lose the fght.
(5) Secondly, they set Acropolis on fre because they didn’t want Persians to get their most precious things.
(6) Finally, they climbed up the hill nearby and went to the highest place.
(2) The Persians were very strong and wanted to invade Xanthos’ territory, so they attacked many times.
(8) Thus, everyone in Xanthos died. Only 80 families who were absent during the fght stayed alive

17. Write the answers to these questions in your notebook.

1. How far was Letoon from Xanthos? It was 10 km away from Xanthos.
2. What was the importance of Letoon and Xanthos for Lycia? Xanthos was the capital city of Lycian Federation and Letoon was the sacred center of Lycia.
3. Why did Xanthosian men burn their women and
children before they committed suicide? Because they didn’t want Persians to get their most precious things.
4. Did Brutus win the fight against the Xanthosians? Yes, he did.

18. Listen and repeat the examples for –ed ending verbs in part A. Then, read the verbs in part B yourself and check your pronunciation.

20 .Imagine you will interview an expert on the Hittites. Use the clues. Write your questions and his/her possible answers making inquiries about the subject

21. Answer: Do you usually ask questions or answer questions?

22. Listen to the questions and answer them. 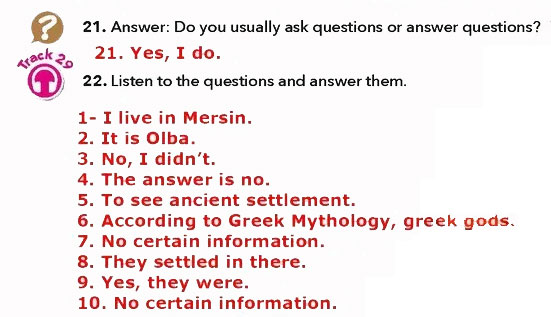